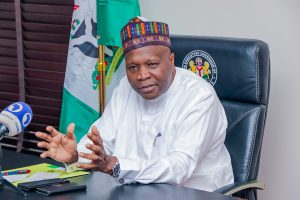 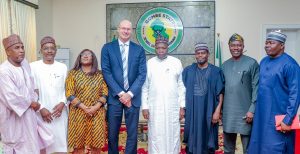 Governor Muhammadu Inuwa Yahaya of Gombe State says his administration will continue to strengthen mutual cooperation and partnership with the Federal Ministry of Water Resources and the World Bank towards the expansion of water supply for the benefit of the people in both urban and rural communities of the State.

Governor Inuwa Yahaya gave this indication when he received a delegation from the World Bank, under the auspices of the Sustainable Urban and Rural Water Supply, Sanitation and Hygiene ( SURWASH) led jointly by the World Bank’s Task Team Lead, Mr. Gérard Soppe and national coordinator of the project, Engr. Abdulhamid Gwaram at the Gombe Governor’s lodge, Abuja as part of high level engagements towards canvassing for developments that are beneficial to the people of the State.

The Governor described the relationship between Gombe State and the Federal Ministry of Water Resources as a long standing one which has seen the development of a clear link in the implementation of projects such as the PWASH, SURWASH and the regional water supply scheme among others.

” I am very happy to say that with what we did in Gombe so far and what you found there base on the arrangements that we had, at least I can say that a framework has been built on which we can now expand and work hard to meet our target”.

He said his administration, in conjunction with the Federal Ministry of Water Resources, is working hard to link both the rural and the urban settlements in Gombe State with water, sanitation and hygiene.

The Governor explained further that since a framework is handy, his administration has since approved the payment of its obligations.

Governor Inuwa Yahaya disclosed that Gombe State has done credibly well on strengthening fiscal transparency, accountability and sustainability which placed the State as number one among its equals.

“By the situation we find ourselves, we have no option than to look for anyone that will partner with us so that we can improve on our general conditions and situations in Gombe State and I am sure for this one, we shall leave up to expectations and beat all the deadlines”.

He expressed confidence that with the team of crack professionals working in his administration, especially in urban water supply, the collaboration to deliver on the projects for the benefit of the people of the State will be successful.

“We have a challenge especially with the rural water supply. I know the African Development Bank AfDB has some set backs in this regard but I know that of the World Bank will be different and Gombe is ready to key in”.

He assured that his administration will not relent on its resolve to continually partner with any government or non-governmental organisations for the benefit of the people of the State.

Earlier, the World Bank’s Task Team Lead, Mr. Gérard Soppe lauded Governor Inuwa Yahaya for demonstrating political will in the implementation of SURWASH project in Gombe State, assuring of his institute’s support for Gombe and other pilot states to ensure efficient functioning of the results-based structure of the SURWASH programme.

The national coordinator of SURWASH, Engr Abdulhamid Gwaram had earlier explained that the project, initiated by the Federal government in partnership with the World Bank is a $700 million programme aimed at providing protection for human health, supporting economic growth in the short-term, mid and long-term for sustainable, inclusive economic recovery that would improve livelihood of the poor and the vulnerable.

He said that the programme which will run for six years became effective from January this year and it is expected to ensure reforms in governance and service provision through increased access to drinking water and sanitation services through construction and rehabilitation of WASH infrastructure.

Engr Gwaram added that the programme will operate in Gombe and six other states of the country.