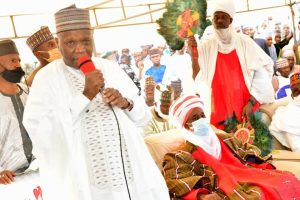 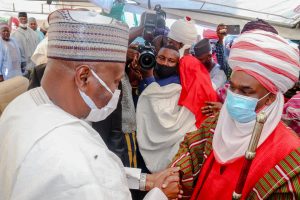 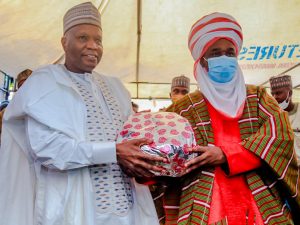 …Charges Citizenry on Engagement in Meaningful Ventures for Socio-economic Development

Governor Muhammadu Inuwa Yahaya has called on the people of Gombe State to take advantage of the peaceful atmosphere in the State to engage in meaningful productive ventures such as farming, animal husbandry and other entrepreneurial activities in order to boost their socio-economic capacity and achieve self-sustainability.
Governor Inuwa Yahaya stated this when he hosted the the Emir of Gombe, Alhaji Dr. Abubakar Shehu Abubakar lll on a traditional Sallah Homage at the Government House.
The Governor expressed gratitude to the Almighty Allah for seeing the Muslim Ummah through the holy month of Ramadan which came to a climax with the Eid el fitr festival, calling on Muslims and non-Muslims in the State to maintain the peace and tranquillity which both Islam and Christianity preach and for which the Gombe is well known.
He assured the people of the State that his administration will not relent in seeking the support, cooperation and wise counsel of the traditional rulers and opinion leaders in order to lead the State in the most effective, efficient and equitable manner. He added that the achievements recorded in the two years of his stewardship will not have been possible without the support of the traditional institution and the people of the state in general.
Governor Yahaya noted that it is only when there is peace that Government can provide social amenities and other services for the wellbeing of the people and therefore appealed to the citizenry to judiciously guard the prevailing tranquillity in the state.
While speaking on the recently launched Gombe state 10-year development plan, Governor Inuwa Yahaya said when fully implemented, the plan will lead to the holistic and comprehensive development of all sectors so that the State will become a one-stop destination for local and international investors.
On the rainy season that is gradually creeping in, the Governor informed the gathering that base on scientific analysis and reports, the amount of rainfall this year is expected to be more than usual and therefore advised the people to ensure the clearing of water channels of dirt’s and to desist from dumping refuse in the drainages to guard against flood related disaster.
He disclosed that the State Government will equally embark on the de-silting of water channels and drainages so as to allow for free flow of water. He said his administration is working hard to tackle the menace of gullies in the state through the Nigeria Erosion Watershed Management, NEWMAP.
He thanked the Emir of Gombe for the Sallah homage, assuring the royal father of his administration’s commitment to continue to deliver dividends of democracy to the people across all the nooks and crannies of the state in line with his campaign promises.
Earlier, the Emir of Gombe, Dr. Abubakar Shehu Abubakar lll said they were at the Government to felicitate with Governor Muhammadu Inuwa Yahaya over the successful completion of the Ramadan fast and to pay him homage on the occasion of the Eid el fitr sallah festival.
The Emir enjoined Muslims to maintain the spirit of Ramadan which encourages fervent prayers and abiding faith in the Almighty Allah for continued peace and stability of the State and the country, saying until such is done the myriads of challenges confronting the nation may not go any time soon.
He used the occasion to pay glowing tribute to Governor Muhammadu Inuwa Yahaya for his holistic approach in addressing the myriad of challenges in the state and for his pragmatic leadership which he said has led to the execution of life changing projects such as the ‘network eleven hundred’ in which at least one hundred kilometres of roads are being constructed in each of the eleven Local Government areas of the State.
He also scored the Governor very high in areas of revitalization of healthcare facilities, repositioning of the education sector; in particular; mopping up of out of school children and returning them back to the classroom, prompt payment of salaries and settlement of outstanding gratuity of retirees among others, describing the achievements so far recorded by the Governor as monumental and unprecedented. He noted that there is no area in the state that has not witnessed the remarkable and developmental strides of Governor Yahaya’s administration.

The Emir later led thousands of Horsemen clad in colourful robes and staged a spectacular parade to the admiration of the Governor and other dignitaries present.