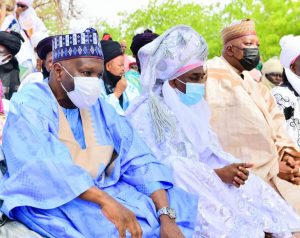 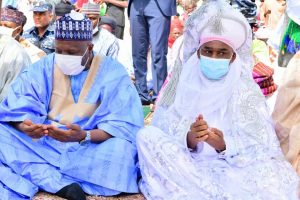 …Describes Gombe as Most Peaceful State in Nigeria
…As Emir of Gombe Treats Governor, Guests to Colourful Durbar
Gombe State Governor, Muhammadu Inuwa Yahaya has emphasized the need for Muslims and Christians in the State to continue to live in peace with one another, noting that without a harmonious relationship between adherents of both faiths and humanity in general no progress can be achieved.
Governor Inuwa Yahaya stated this when he hosted members of the State House Assembly, Commissioners and other top Government functionaries to a lunch to appreciate the Almighty Allah for the successful completion of the Ramadan fast, which came to a climax with the Eid el-fitr festival.
The Governor observed that the Eid el- fitr celebration, which came at the heels of the lent and Easter festival, signifies the brotherhood that exists among the people which largely consist of both the Muslims and Christians.
“We thank God that in Gombe State we have been living peacefully with one another, both Christians and Muslims, in brotherhood and good neighbourliness and for that we have every reason to celebrate and coming now to Eid el fitr, that we are celebrating today after earlier celebrating the Easter, I think this is also another reason for us to get together and rejoice”.
He expressed gratitude to the Almighty Allah for sparing the State from crisis despite being in the North East which has seen years of violent attacks by insurgents, describing Gombe as the most peaceful State in Nigeria at the moment.
The Governor used the occasion to admonish both Muslims and Christians alike to continue in the spirit of Ramadan and the Lent in order to guard and maintain the peaceful and harmonious relationship that has existed between the two faiths in Gombe State, because according to him, where there is no peace, there won’t be progress.
He admonished Muslims to maintain the essence and spirit of Ramadan so as to appreciate what the needy and the poor in the society pass through, noting that if humans can feel the pains of their fellows, the situation the nation finds itself can be avoided.
He said in lieu of the current spade of kidnappings for ransom, Nigerians must work collectively regardless of differences to restore normalcy for which the country is known for, describing such acts as alien to the nation’s socio-cultural experiences.
Governor Inuwa Yahaya prayed God to grant Gombe State, the North East and Nigeria in general peace, saying if Nigeria is short of peace, the whole of Africa can be in turmoil because in West Africa one out of every three West African is a Nigerian.
He disclosed at the occasion that he will soon embark on a State-wide tour to further re-establish and re-emphasize his administration’s commitment towards improving the lot of the people on whose mandate he is sitting as the state chief executive.
Earlier In an address of welcome at the lunch, the Deputy Governor of Gombe State, Dr. Manassah Daniel Jatau said from the peaceful and colourful display of durbar at the palace of the Emir of Gombe, it is evident that Gombe State is not only peaceful but well governed by the administration of Governor Muhammadu Inuwa Yahaya.
Dr. Daniel Jatau prayed that the blessings and rewards attached to the month of Ramadan will abide with Muslims and non Muslims alike in the State and beyond.
Governor Inuwa Yahaya had earlier joined the Emir of Gombe, Dr Abubakar Shehu Abubakar lll, dignitaries and other Muslim faithful to observe the 2- Raka’at Eid prayer at Gombe central Eid praying ground which marked the end of Ramadan fast.
In a sermon delivered by the chief Imam of Gombe Central mosque Ustaz Hammari shortly after the two raka’at prayer, the cleric charged the congregation to sustain the devotion and other good deeds performed during the Ramadan period for continuous rewards and blessings from Almighty Allah.
He called on Muslim faithful to intensify prayers for return of peace in Nigeria and bumper harvest, especially at a time like now when rainy season is setting in.
While heading for the event’s venue at the Gombe Emir’s palace the Governor’s motorcade passing through the major streets of the metropolis received an overwhelming cheers by well- wishers in appreciation of the positive impact his administration is making in the lives of the citizenry.
At the Palace of the Emir of Gombe, Governor Muhammadu Inuwa Yahaya and other dignitaries were treated to a colourful durbar to the admiration of all.
In his message to mark the religious festival, the Emir of Gombe, Dr. Abubakar Shehu Abubakar lll, called for sustained prayers for the nation and its leaders.
He equally enjoined famers to brace up for the rainy season, just as he emphasized the need for harmonious relationship among the diverse people of the state and in particular between farmers and herders for a peaceful Gombe state.

The monarch commended Governor Yahaya’s leadership style and his unprecedented achievements in all facets of human endeavours.