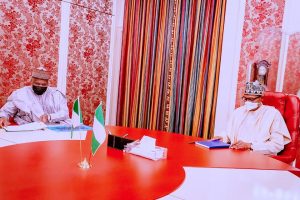 Gombe State Governor, Muhammadu Inuwa Yahaya, has met with President Muhammadu Buhari at the Presidential Villa, Abuja.
President Buhari and Governor Yahaya discussed critical issues affecting Gombe State and Nigeria in general, including the establishment of the Muhammadu Buhari Industrial Park whose contact was awarded by the state government.
The President promised the support of the federal government to the governor towards sustaining efforts at maintaining peace and security, and enhancing socio-economic development.
The Governor later told State House correspondents that he intimated the President on the award of contract for the construction of an Industrial Park which is named after the President.
He said when completed the park will not only boost the economic standing and stability of the State but will create jobs for the teeming youths within and outside the State.
“We discussed on the issue of Gombe Industrial Park which we awarded the contract for contraction to start early and it has been named after Mr. President. So, I informed him and sought his support to see that we deliver on that.
“Our people are naturally peasant farmers and herders and if we’re able to put up the industrial park, we’ll have a big place that can provide opportunities for our youths in the industries within Agricultural production, processing, marketing and distribution so that they will have very good means of livelihood and the economy will also improve “.
Governor Inuwa Yahaya explained that issue of security was discussed in view of the fact that Gombe State has been playing a comforting role housing Internally Displaced Persons IDPs from Boko Haram inflicted states of Borno, Yobe and Adamawa states thus putting a strain on the State’s social infrastructures.
“For us we don’t put them in IDP camps; we allow them settle within our people and they have already acclimatised and are staying with our people but that puts a lot of strain on our resources, Schools, hospitals and other social facilities and amenities and equally security management is becoming an issue not only that the de-radicalization centre which is used in rehabilitating and integrating those that surrender from insurgency is located in Gombe and since 6 years now that the facility has not been fully taken over by the Federal Government.
This take over of the NYSC camp by the Federal government, the Governor observed, has impacted negatively on the State’s ability to attract more Corps members to the State due to lack of a spacious Orientation camp and therefore wants the Federal Government to reimburse the State with equivalent amount so that it can construct another one.
The governor also tabled before the president, the issue of Wawa-Zange grazing reserve and the need to fast track work, especially given the fact that it is the largest gazetted reserve in Nigeria with over 144, 000 hectares and the one that is supposed to be the pilot project for the national livestock transformation programme of the federal government.
He said with the return of herdsmen in multitudes to northern part of the country following the anti-grazing position of some southern states, there is no better time than now to fast track the Wawa-Zange project to avoid rancour.
Also discussed was the issue of oil and gas.
The Governor noted that the political will and the passion displayed by the President Muhammadu Buhari towards the development of the oil and gas sector right from his days as a Federal commissioner of Petroleum presupposes that the President brings his influence to bear towards the take off of full activities in the Kolmani oilfield.
“The NNPC division of frontiers exploration has done a lot of work with the deposits discovered.

“With the discovery of oil and gas in Gombe and Bauchi States, and specifically in Komani area, and because of the political will of Mr. President and the interest shown by investors who want to put in money to develop the gas and oil deposits in that area, there is need for us to work closely with the federal government to fast track the process of the takeoff so that the people will benefit from God-endowed resources and economic activities will be triggered also”.