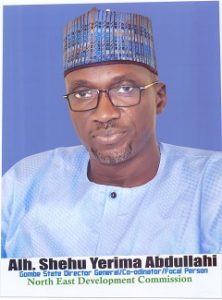 Alhaji Shehu Yerima Abdullahi was born on March 7th, 1967 in Ajiya Ward of Gombe Local Government. Happily married and blessed with children, he had his early education within Gombe town before advancing to the Usman Danfodio University, Sokoto for an undergraduate degree in Botany. Upon completion, he successfully underwent a postgraduate diploma in Management at the Abubakar Tafawa Balewa University, Bauchi.
He started his career in the private sector rising to the position of Marketing Manager, Landa (PP) Industries Limited, Gombe in 1993. He became MD/CEO of Groundnut Processing Company Limited, Gombe in 1997. In 2003, he left that role to join civil service when he Special Adviser (Investment) to the Executive Governor of Gombe state. He occupied that office for four years before getting re-appointed to it again in 2014, seven years later and to advise a different administration. In 2019, he emerged as the Gombe State Director General as well as the focal person in the North-East Development Commission (NEDC), a position he holds till date.
He is passionate about community services and development, more especially in the spheres of youth enlightenment and empowerment.