The State climate is generally warm, with temperatures not exceeding 300c during the months of March-May considered to be the hottest months. The following table gives other profile of the jewel state.

Gombe State was carved out from defunct Bauchi State on the 1st October, 1996 by the former Head of State and Commander in chief of Armed Forces, Federal republic of Nigeria, Late General Sani Abacha GCFR.

Land Area: The State occupies a total land area of about 20,265sqkm.

Climate :Warm, exceeding 40″c during the hottest month (March – May)

Topography: Mainly mountainous, undulating and Hilly to the South-East and flat open plains in the Central, North, North-East, West and North-West.

Location: Latitude 9”30’ and 12”30’N, Longitude 8”5’and 11”45’E. The state lies in the centre of North east Geopolitical Zone of Nigeria. It shares common boundaries with Adamawa and Taraba State to the South, Bauchi State to the West, Borno State to the East and Yobe State to the North.

Power: The State is served by the PHCN National grid through the North-East PHCN substation located in Gombe State capital

Roads: Five(5) Federal trunk “A” roads connect the State Capital with all parts of the Country. Twonship roads have been constructed in the State capital and all the major towns.

Language Spoken: English is the official language, but as much as Hausa remain the commercial language amongst the people of the state, Fulfulde, Tangale, Tera, Waja, and Kanuri are commonly spoken.

Vegetation: Gombe is generally a Guinea Savannah grassland with concentration of wood lands in the South East and South West.

Gombe State, was created out of Bauchi state on 1st October 1996 by the Late General Sani Abacha’s Administration. Its creation was a fulfilment of the aspiration of the people who for long, had passionately craved for a state of their own out of the then Bauchi state.

Historically, Gombe state is a fusion of two distinct groups of people, comprising the Emirate of Gombe North and the ethnic grouping of Gombe South. Bubayero established the Emirate during the jihad period of 1800. It emerged as part of a larger state building force of 19th century Sokoto jihad.

The Emirate government, which had its Head quarters in Gombe Abba, was formed to effectively control what constitutes a larger part of the Gombe State, until the advent of the British in the early 20th century.

Under the British, the state was administered through the mechanism of two administrative units, i.e. Gombe Native Authority and Tangale Waja Native Authorities. The two Authorities constituted Gombe Division during the Colonial era. However, with independence in 1960 and the subsequent military administration, many changes occurred which led to the emergence of local government authorities. Thus, between 1976 and the present, the then two authorities had metamorphosed into the present 11 local governments.

The following Map indicates in red the position of Gombe in relation to the thirty six (36) states of the federation. 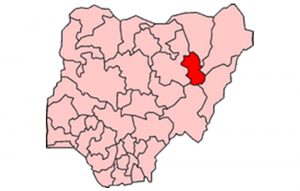 The following is the administrative map of Gombe State showing the local governments. 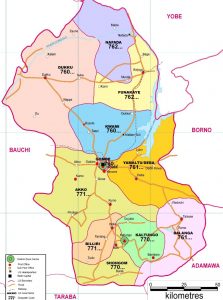