Skip to content
November 30, 2021
‘Gombe will be a Terminus of Growth, Development, Shared Prosperity by 2030’, Governor Inuwa Yahaya Projects
…As UN Deputy Secretary General, Eminent Personalities Hail Gombe 10- Year Development Plan
Gombe State Governor, Alhaji Muhammadu Inuwa Yahaya has projected that by the year 2030, Gombe state will be a terminus that will encapsulate growth, development, peace and shared prosperity for the entire citizens of the State.
Governor Inuwa Yahaya stated this while speaking at the Round-off Stakeholder Engagement on Gombe State 10-year development plan, stressing that the State has all it takes to think, dream and act big in order to achieve its objectives.
“We have a vibrant and industrious population, tremendous amount of natural resources, rapidly growing urban centres, relative peace and stability, huge agricultural and hydropower potential that can complement the desire of the State to be a model”.
The Governor said the State 10-year development plan is in agreement with the Sustainable Development Goals, SDGs and the ‘Needs Assessment’ carried out by his administration on assumption into office.
“For us, what we did in the last one and half years and what we project for 2021 to 2030 which is exactly 10 years from now will make us actualize our dreams of taking Gombe to the next level”.
The Governor said the convergence of sons and daughters of Gombe State is a clear demonstration of their commitment and sacrifice towards the development of the State.
“There is no denying the fact that the preparation of the State development plan (2021-2030) is a critical milestone in the history of the State but while we produce a roadmap for the development of the State we ensure long term and sustainable plan that will facilitate the attainment of Sustainable Development Goals SDGs”.
He said the geographical location which places the State at the centre of the North East sub-region also makes it the nerve centre of trade, social and economic development, saying for the first time in the history of the State his administration is about to give birth to a document that will ensure programmes and projects that will be delivered efficiently in order to guarantee value for money.
Governor Inuwa Yahaya commended the Steering and Technical committees on the 10-year development plan for the effective and efficient manner with which they coordinated series of meetings with stakeholders at ward and Local Government levels.
“I also wish to thank the role played by the Senior Special Assistant to the President on Sustainable Development Goals, SDGs and the United Nations Development Programme, UNDP throughout the preparation of the plan”.
The Governor equally thanked the United Nations Children Fund UNICEF and the United Nations Fund for Population Activities,UNFPA for their active participation on both steering and technical committees’ activities”.
He equally expressed his appreciation to eminent sons and daughters of the State who came to be part of the process or joined virtually, describing them as patriots, whose contributions will be of immense benefit to the development plan.
The Chairman, Steering Committee of the State 10- year development plan and State Deputy Governor of Gombe state, Dr. Manassah Daniel Jatau said the State Governor has cultivated a strong political will to ensure that the State is developed in all its ramifications.
He said the revolution in education, health, wealth creation, reduction in the rate of unemployment by the establishment of the industrial park and encouragement of agricultural activities in the State are all pointers to the genuine intentions of Governor Muhammadu Inuwa Yahaya to transform the State the more through the development plan.
The Deputy Governor said the plan is a comprehensive and articulated document that will guide development and provide a roadmap for future leaders on what to do when to do and how to do it.
In a virtual goodwill message to the occasion, the United Nations Deputy Secretary General, Amina Mohammed congratulated Governor Muhammadu Inuwa Yahaya alongside the technical committee for producing the plan that she noted will guide future developments in the State.
She said the United Nations will work in partnership with the Gombe State Government to translate the plan into a working document that will be beneficial to the people of Gombe State.
Other Local and International UN Agencies who threw their weight behind the Gombe 10-year development plan include UNICEF, UNDP, UNFPA, SDGs office and the civil society network in Gombe State.
There was also a goodwill message from the first Military administrator of Gombe state, Group Captain T. I. Orji ( Rtd).
Eminent sons and daughters of the State, including former minister of FCT, Dr. Aliyu Modibbo Umar, former Minister of state on Power and Environment, Malam Murtala Aliyu and Surveyor Sulaiman Hassan Jara, DG NESREA, Prof. Aliyu Jauro, former PENCOM DG, Malam M.K Ahmad, the Sarkin Fulani of Gombe, Alhaji Umaru Kwairanga among so many others made far reaching contributions on how the ten year development plan can be translated into workable and practicable documents for the benefit of the people of the State.
They commended the visionary and pragmatic leadership of Governor Muhammadu Inuwa Yahaya in developing a plan for the State, which they expressed optimism will put Gombe on solid platform that will guarantee sustainable growth and development.
The lead consultant for the Gombe state 10-Year Development Plan, Professor Emmanuel Onwioduokit, who presented the draft document before the audience, said the Gombe State Development Plan is predicated on facilitating longer term visioning for the state’s development planning and policy making.
Ismaila Uba Misilli
Senior Special Assistant
( Media and Publicity)
21st December, 2020 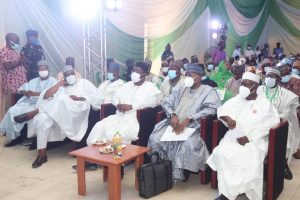