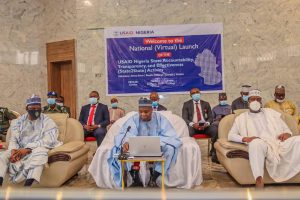 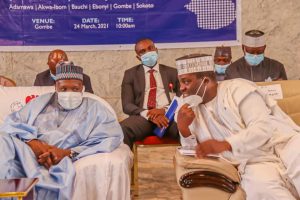 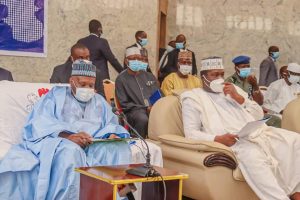 Gombe State Governor, Muhammadu Inuwa Yahaya has expressed optimism that the State2State project of the United States Agency for International Development, USAID through the Development Alternative Initiative ( DAI) will support the reforms being carried out by his administration to ensure that citizens of the State benefit from the lofty ideals of the partnership.
Governor Inuwa Yahaya stated this at the national virtual launch of USAID Nigeria, State Accountability, Transparency and Effectiveness (State2State) activity in Gombe, Bauchi, Sokoto, Akwa Ibom, Ebonyi and Adamawa States.
He said since coming into office in 2019, his administration has embarked on significant governance reforms having realized that there will be no meaningful development without it.
This, the Governor said, is in line with the promise he made to the people to deliver on good governance which guarantees democratic dividends to the citizens of the State.
“I am delighted that the State2State project has started in Gombe since October 2020 and is a testimony to the commitment made by USAID when the Country Director visited us in December, 2019”.
Governor Yahaya said since the commencement of USAID activities in the state, he had hosted the Chief of Party of the project, Mr. Tressan Sullivan and his team in his office late last year where an insightful discussions were held on the new project and the vision of his administration for the state.
” I am pleased to note the aim of State2State project; which is strengthening governance systems with a focus on public financial management [PFM] and procurement, as well as monitoring and evaluation related to the delivery of services in key sectors such as basic education, primary health care, and water, sanitation and hygiene [WASH]) as well as increasing government responsiveness to citizen needs, priorities and improving government and civil society capacity to manage conflict, which he emphasized sits firmly with this administration’s focus on human capital development as the pathway to sustainable prosperity for the people.
“Some of the Governance reforms that we embarked upon since coming into office include; establishment of the Budget planning and Development partner’s coordination office, headed by a development practitioner. This office coordinates all donor related activities in the state”.
The Governor added that his administration has equally established the Bureau for Public Service Reforms,
trimmed down the number of Ministries from 29 – 21,
re-examination of the fiscal laws in the state that were passed into law some years ago but were not being fully implemented.
Other reforms, Governor Inuwa Yahaya explained, include the re-organization of the State Internal Revenue Generation outfit which is already yielding positive results, noting that brought about the highest IGR collected in 2020 ever since the state was created in 1996.
“We introduced the Treasury Single Account in order to block leakages. We have embarked on biometric data capture of Civil Servants.
We developed a Ten- year development plan tagged Development Agenda for Gombe State DEVAGOM 2021 – 2030, Establish the Hospitals Management Board as well as the Health Insurance Scheme (GoHealth) to ensure an efficient delivery of health care to our people across the state”.
While acknowledging the efforts of other USAID funded projects in Gombe state such as USAID Strengthening Education in the North East, SENSE, Mercy Corps and host of others, the Governor expressed the hope that the State2State project will support the reform efforts being carried out in Gombe State to ensure that our citizens benefit from the lofty ideals of the partnership, expressing the hope that the State2State project will look at the road map in DEVAGOM, hoping that the project will provide support where necessary.
In their separate remarks, the Governors of the benefitting states of Sokoto, Akwa Ibom, Ebonyi, Bauchi and Adamawa States agreed with their Gombe State counterpart on their readiness to support the successful implementation of the project in their respective states.
In a goodwill message, the chairman, Nigeria Governors’ Forum and Ekiti State Governor, Dr. Kayode Fayemi called on the benefitting states to take advantage of the USAID’s State2State project to improve their capacity on accountability and transparency in public service.
Earlier speaking, the United States Ambassador to Nigeria, Mary Beth Leonard said USAID will continue to provide technical support to Nigeria to strengthen accountability, transparency and effectiveness in public service.
The five-year, $72 million State2State Activity will help improve how the participating states plan and budget, raise revenues, increase civil society participation, and oversee service delivery in the health; education; and water, sanitation, and hygiene (WASH) sectors.”