In a demonstration of leadership and keeping with the Covid-19 vaccination protocol, Governor Muhammadu Inuwa Yahaya today received his second jab of the AstraZeneca vaccine at his official residence in the Government House to flag off the commencement of the second phase of the exercise. 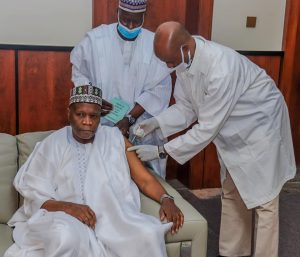 The Governor was inoculated by his personal physician, Dr. Bello Abdulkadir in the presence of the State Deputy Governor, Dr. Manasah Daniel Jatau, Secretary to the State Government, Professor Ibrahim Abubakar Njodi, Chief of Staff, Abubakar Inuwa Kari and other top Government functionaries who also received the dose.

Briefing Journalists, the State commissioner of Health, Dr. Habu Dahiru said the second dose of the AstraZeneca covid-19 vaccine administered on Governor Inuwa Yahaya was coming after the first jab was inoculated on him and subsequently the people of the State on the 17th of March 2021.

The Commissioner explained that the Ministry of Health has established 78 vaccination centres across the State so that people can easily access such points.

He said so far  about 47 thousand persons have been vaccinated in the State with a total coverage of 103 percent, describing the feat as encouraging.

“Today being the 1st of June, 2021, His Excellency, Governor Muhammadu Inuwa Yahaya was again the first to take his second dose of the AstraZeneca covid-19 vaccine in Gombe State, signalling the commencement of the second round of the vaccination exercise”.

The Commissioner said like it was in the past, vaccination points are still handy across the State for only those who have taken the first jab to complete their doses for a full immune system strengthening.

He said the second phase of the vaccination exercise which is strictly for those who have received the first dose was so arranged to guard against any shortage of the vaccines, stating further that the exercise will still continue to 2022 until everyone is vaccinated against the Coronavirus.

He reminded those eligible for the second jab to come along with their vaccination card so that their details can be captured appropriately.

Recall that while flagging-off the first phase of the Covid-19 vaccination exercise in March this year, Governor Inuwa Yahaya had vouched for the safety and efficacy of the Oxford AstraZeneca vaccine, saying “My decision, and that of other senior government officials to take the vaccine in this phase is to demonstrate confidence in the safety and efficacy of the vaccination programme”.

He assured that his administration will continue to accord great priority to the health of its citizens, saying as the Governor of the State he has the responsibility to ensure that the health and wellbeing of the people in the state is given the needed attention.

“Gombe State is among the best states across the country that worked tirelessly to curb the spread of Covid-19 among its people. My Government has established six isolation centers and built a standard molecular diagnostic laboratory in the fight against covid-19, the rapid response team have also been supported with logistics to conduct there activities across the state”, Governor Yahaya had said.