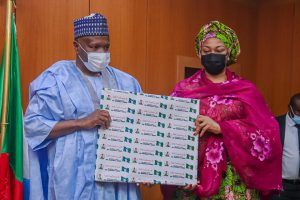 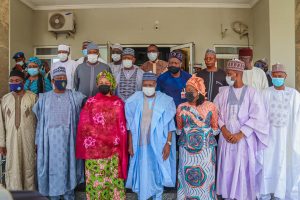 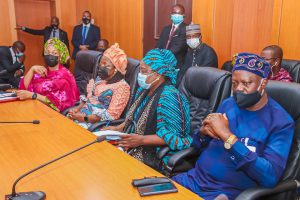 Governor Muhammadu Inuwa Yahaya of Gombe State has informed the visiting Minister of State for Transportation, Senator Gbemisola Rukayyat Saraki that the rail line connecting the North Eastern corridor of the country has been the most neglected, hence the urgent need for the Federal Government to expedite action towards its resuscitation.
Governor Inuwa Yahaya gave this indication when he granted audience to the Minister of state for Transportation who paid him a courtesy visit at the Government House ahead of the commissioning ceremony of the Nigerian Institute of Transport Technology, NITT’ Gombe Outreach Learning Centre in Kumo.
The Governor noted that no reasonable manager of human resources can do without transportation due to the critical role it plays in the movement of goods and services, describing the siting of the Gombe outreach learning centre of the NITT in Kumo as a welcome development for the people of the State and by extension, the North East sub-region.
Governor Inuwa Yahaya observed that the centre will not only assist the youths in acquiring skills for the proper management of transportation in the zone, but will also help equip them with relevant skills for self employment, especially in such a time when jobs are hard to find by both the educated and the uneducated.
He said, “Recently we set up a portal to find out the numbers of the unemployed, believe me I was shocked to realize that we have 4752 unemployed graduates that registered, some of them have been unemployed for more than 6 years waiting for the white collar job. That is only for the graduates for you, 24 of them with first class honours and when we extended it to OND and NCE holders, within 24 hours more than 750 registered and I believe by now we should be counting thousands”.
He however expressed optimism that the NITT centre will provide a fertile ground for the teeming unemployed youths in the State to acquire skills that will benefit them in the future.
The Governor informed the visiting Minister that his administration is investing heavily in the transportation sector through its flagship programme, the network Eleven-Hundred which seeks to construct at least one hundred kilometres of roads in each of the eleven Local Government Areas of the State thereby linking up the State to ease the movement of goods and services.
He stressed the need for the Federal Ministry of Transportation to facilitate the restoration of railway services in the North East sub-region as it is a priority to the people of the zone, adding that his administration will do everything necessary to support the institute in particular and transportation sector in general.
Earlier speaking, the Minister of State for Transportation, Senator Gbemisola Rukayyat Saraki told Governor Inuwa Yahaya how strategic the State is to the growth and development of the Transportation sector in the North East zone of the country as well as the role NITT can play in providing the needed manpower for improving transport and logistics management operations not only in Gombe State but the entire zone.
The Minister sought the support and patronage of the Gombe State Government towards the programmes and services the Nigerian Institute of Transport Technology NITT offers, just as she craved the indulgence of Governor Muhammadu Inuwa Yahaya to be the institute’s Ambassador in the NorthEast.
She appealed to Governor Inuwa Yahaya as well as his counterparts in the North East sub-region to mobilize youths in their respective states to enrol in the institute skills acquisition training programmes with a view to reducing unemployment in the zone.
The Minister said the administration of President Muhammadu Buhari is working to revamp the economy to which the transport sector is one, saying the Federal Government through the Ministry of Transportation is investing heavily towards the revitalization of rail lines across the country to restore rail transport to Nigerians like the Port Harcourt/Gombe/Maiduguri rail line.

Sen. Saraki thanked the Governor for providing support to the institute, describing Gombe State Government as a great client of the NITT.