Governor Muhammadu Inuwa Yahaya was in Adamawa State on a one-day working visit on the invitation of his Adamawa state counterpart, Ahmadu Umaru Fintiri where he commissioned 3.5 Kilometre township road in Numan town, a local government area of state. 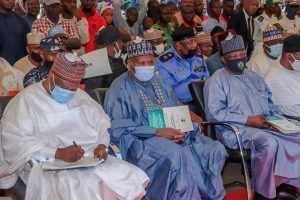 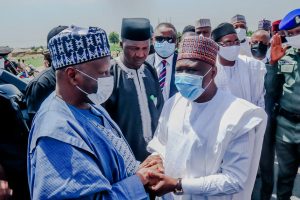 The 3.5 kilometre Izala- Gwaida Malam fada- Wayam road project in the ancient town of Numan was initiated by governor Umaru Fintiri’s administration in August 2020 and completed in April 2021.
In his address during the road project’s commissioning ceremony Governor Inuwa Yahaya said the invitation to inaugurate the Numan Township road is an honour done not only to him alone but the entire people of Gombe State.
“The invitation was extended to me some 10 days back by my Adamawa state counterpart to come and Commission a road project in Numan on the 19th May, 2021 and here I am today honouring the invitation”.
Governor Inuwa Yahaya said despite being colleagues he has great respect for his Adamawa State counterpart who as a politician is always dogged, resolute and responsible towards marching his words with action, commending Fintiri and the entire people of Adamawa State for the feat so far achieved.
The Gombe Governor extended the support, solidarity and hands of friendship of the Government and people of Gombe State to the people of Adamawa State, saying that the invitation extended to him indicates that there is a long standing relationship that had existed for centuries between the people of Adamawa and Gombe State.
He assured Governor Ahmadu Umaru Finitiri and the people of Adamawa State that no matter the challenges the devil and his agents will never win the battle he brought between the Lunguda and Waja speaking communities of Adamawa and Gombe States.
“Our coming here today signifies a lot of things and that is why while coming I made sure that everybody with a stake in this move is with us so that we discuss in details on the issues revolving around the lingering ethnic crisis between Lunguda and Waja Communities by some disgruntled elements”
He noted that the invitation was a great honor to the people of Gombe State especially in such a time when in some parts of the country, others are beating the drums of war, separation and secession against beating the drums of Celebration, success and unity which the Numan road project’s commissioning signifies.
The Governor congratulated Governor Umaru Fintiri for achieving the feat of actualizing the Numan township road project in particular and the good work he is doing in the State in general, praying God to reward him abundantly.
“You have proved your mettle, you are doing your own bit and in this hard times where ever you see a performing Governor I think is something to behold and you need to solidify and stand by him so I wish to congratulate you and what I have seen here today has really shown that the people of Adamawa State are solidly behind you especially with the kind of songs they were singing during our arrival”
The Governor of Adamawa State, Rt. Hon. Ahmadu Umaru Finitiri said the commissioned Izala-Gwaida- Malam -Wayam road comes with a complete drainage system as part of his administration’s package to diversify the urban renewal campaign thereby easing the infrastructural gap in Yola, the State capital which is wide with attendant urban pressure.
He said it is in realization of this anomaly that his administration decided to address the issue with a broader plan of building infrastructure in the State capital and improving same in semi urban centers across the State.
“This, we believe will eventually lead to injecting municipal lives in the suburbs and reduce pressure on the State capital and make life more meaningful for our people where ever they choose to stay within the State”.
He said the Numan federation and the entire Bachama Kingdom are having their fair dose through the delivery of the 3.5 kilometers township road which had been a nightmare to the people of the area. ” I have deliberately invited my elder brother, the Executive Governor of Gombe State , Muhammadu Inuwa Yahaya to come and Commission this project to demonstrate the level of brotherhood that we share as leaders of our respective states”.
He said Gombe and Adamawa states share a bound that is difficult to separate wherein each time there is squabbles in the form of conflict among ethnic groups it is no doubt the work of the devil, adding that both Chief Executives will leverage on the commissioning ceremony to pronounce total peace in the entire southern zones of their states.

Earlier, the Adamawa State commissioner of works and energy, Adamu Atiku Abubakar said with the construction of the 3.5 kilometers Numan township road, the perennial flood disaster suffered by the people of the area is now a thing of the past, commending Governor Ahmadu Umaru Finitiri an as astute administrator per excellence.