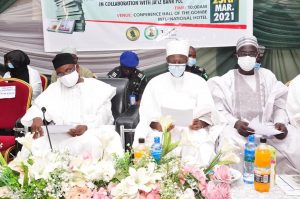 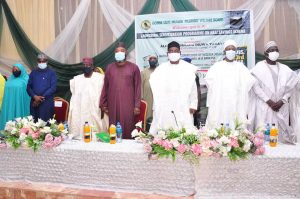 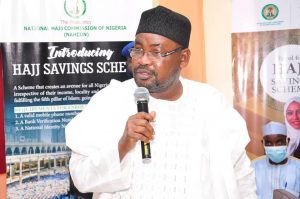 Gombe State Governor, Muhammadu Inuwa Yahaya has assured the National Hajj Commission of Nigeria, NAHCON and Jaiz Bank that his administration will continue to work in partnership with them in order to enable low income earners from the state reap the benefits of the newly introduced Hajj Savings Scheme.
Governor Inuwa Yahaya stated this at the launching/sensitization programme on Hajj Savings Scheme, organised by the National Hajj Commission of Nigeria in conjunction with Jaiz Bank in Gombe.
Represented by the Secretary to the State Government, Professor Ibrahim Abubakar Njodi, the Governor described the initiative by NAHCON and Jaiz Bank to create a saving scheme for prospective low income Muslim Pilgrims as an excellent move which will go a long way in actualizing the dreams of individual Muslims who hope to undertake the religious journey.
While assuring NAHCON and Jaiz Bank of his administration’s unwavering support towards the success of the Scheme, Governor Inuwa Yahaya said the State Government under his leadership will trigger a policing mechanism to judiciously guard and protect the wealth of the people who will open accounts with the Scheme.
He advised both organisations to intensify their sensitization campaign to towns and villages so that Muslims across the State can benefit from the scheme . He challenged Jaiz Bank in particular to make justice and fairness their watch words as their actions can either make or mar the success of the scheme.
Governor Yahaya equally used the occasion to remind the people of the state that the Covid-19 Pandemic is still very much in existence and appealed to traditional and religious leaders to embrace the AstraZeneca vaccine in order to safe human lives.
The Chairman and Chief Executive Officer of the National Hajj Commission of Nigeria, NAHCON, Alhaji Zikirullah Kunle Hassan said under the Hajj Saving Scheme, subscribers can get reward of their intentions before actualizing the journey.
Represented by a National Commissioner in the Commission, Prince Momoh said every Muslim can participate and will have the opportunity to perform the holy pilgrimage without having to sell off his or her assets.
The Managing Director and Chief Executive Officer of Jaiz Bank, Hassan Usman said the National Hajj Savings Scheme is a significant milestone for all Hajj stakeholders in Nigeria.
Earlier, the Executive Secretary of Gombe State Muslim Pilgrims Welfare Board, Alhaji Sa’adu Hassan said the board will galvanize support for the successful implementation and patronage of the scheme in the state.
He said following the suspension of Hajj operations due to the Covid-19 Pandemic, the board is mindful of Pilgrims whose monies are still with it and will give priority to them when restrictions on pilgrimage are finally lifted.
Some notable Islamic clerics like Sheikhs Adamu Dokoro, Usman Isah Taliyawa, Bashir Ladan and Hamza Abdulhamid threw their weights behind the Hajj Savings Scheme, calling on low income Muslim faithful to take advantage of the initiative in order to fulfil their dreams of visiting the holy land in Saudi Arabia.