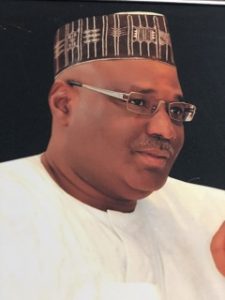 Idris Muhammad Mahdi was born in Gombe on 15th December, 1960. He hails from Yamaltu-Deba Local Government Area of the state.
His academic sojourn took him to the University of Jos, where he bagged a bachelors degree in Building. He later on went to the University of West London (Brunel) for advanced studies in Building Services and Engineering.
He is a fellow to the Nigerian Institute of Builders (FNIOB). He is also a member of the Institute of Corporate Executives of Nigeria (MICEN) and the Council of Registered Builders in Nigeria (MCORBON).
He possesses ample work experience with a career spanning across both the private and public sectors, having previously held roles such as the Project Engineer for Bauchi Central Market, the Project Manager of Bauchi Indoor Sports Hall, the Administrative Secretary of the NRC political party in Ningi LGA, Bauchi State, the Sole Administrator of Dukku LGC in Gombe State, the Deputy Director (Planning) at the Gombe State Ministry of Works, the Assistant General Manager (Properties) at the Gombe State Investment and Property Development Company LTD, among others. He was the project manager of health projects financed by the African Development Bank (ADF) in both Bauchi and Gombe States. Most lately, he was the Director (Estate and Works) in the National Assembly from May 2004 to December 2011. Immediately after which, he became a Honorable Commissioner of the Gombe State Government, a role he occupied up till May 2015.