Skip to content
January 24, 2022
Governor Mohammadu Inuwa Yahaya made the disclosure when he received coalition of non governmental organisation at the Government House.
The group who are on a peaceful rally to protest the increasing cases of rape in the State were received on by the Secretary to the Gombe State Government Professor Ibrahim Abubakar Njodi on behalf of the State Governor.
Njodi told the peaceful Protesters that Government is concerned about the situation and have since sent a bill to the State House of Assembly which will prescribed stiffer punishment for perpetrators of rape.
He said Gombe State Government is considering tree options which are, death sentence castrations, or life imprisonment assuring members of the group that as soon as the bill is passed they will be invited for the signing ceremony.
He call on parents to be more vigilant about the movement of their children as measure to curtail the ugly act which he described as inhuman.
The spokesman of the group and Chairman of None Governmental organization in the State IbrahimYusuf said the coalition of nongovernmental organisations in Gombe State is worried with the raising cases of rape which ranks the State as having the highest prevalence SGBV in the country.
He said, a total of 44 cases of rape have been prosecuted from January to July 2020.
Joshua Danmalam Information Officer SSG’S Office.
15/10/2020 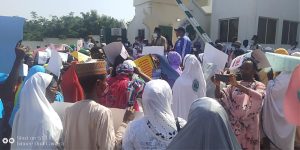 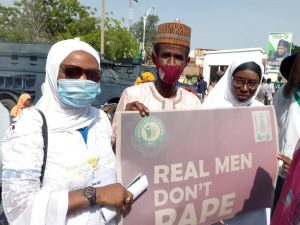 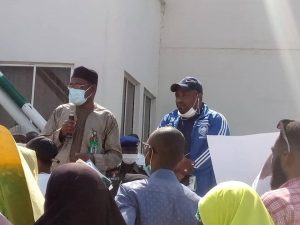 Governor Muhammadu Inuwa Yahaya of Gombe State says his administration will collaborate with the federal government and relevant organizations to tackle gender- based violence and all vices affecting women and children.