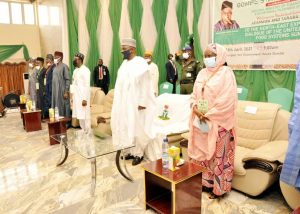 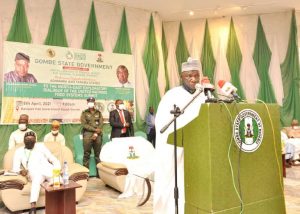 The Gombe state government has reiterated commitment to adopt collaborative approach with Federal Government, United nations and other development partners towards building a sustainable food system and accelerate the match to achieving the Sustainable Development Goals(SDGs).
The position of the government was made clear when the Governor of Gombe State Muhammadu Inuwa Yahaya was addressing participants at the Banquet Hall, Government House, Gombe during an Exploratory Dialogue of the United Nations Food System Summit in the North East for Adamawa, Taraba and Gombe States, organized by the state government in collaboration with the Federal Government and the United Nations.
Represented by the Deputy Governor, Dr. Manassah Daniel Jatau, the Governor noted that the collaboration would provide opportunity for brainstorming and harnessing of ideas on how to tackle food security and improve food system in the region.
He said” the action tracks for the dialogue is in line with the developmental priorities of our dear geopolitical zone. Therefore, this exploratory dialogue is also an opportunity for us in the region to take stock and intensify action towards improving nutrition security, reducing hunger and prevalence of malnutrition in line with Nigeria’s National Food and Nutrition Policy”.
The Governor noted that the state and the entire North East sub region has enormous potentials, including an enviable human development indicators, but lamented the inability to tap the potentials, adding that the Boko Haram insurgency has further compounded the problem, especially in Gombe state, where there were massive influx of people from conflict areas.
Governor Inuwa explained to the participants that Gombe State has rich agricultural land and three dams which can be utilized for irrigation and dry season farming, calling on the people to make good use of the opportunity to boost agricultural farming towards sustainable economy.
He commended the Federal Government and all development partners over strategies deployed towards achieving food security, ending hunger and improving nutrition as well as promoting sustainable agriculture for the planet.
Speaking at the occasion, the Special Adviser to the Governor on Budget, Planning and Development Partners Coordination Office, Dr. Ishaku Mohammed highlighted on three major areas, consisting of setting the scene, principles of engagements and key questions to focus on during the dialogue.
He pointed out that under setting the scene, the forum shall consider insurgency, high incidence of toxic agrochemical use, low access to credit facility, population and environmental issues among others, and under principles of engagement he said, the food system summit is guided by a set of seven principles under which , is the summits vision of an equitable and healthy future for all, and one that gives a voice to citizens in every country of the world.
The key questions to ask according to him include, how can agricultural livelihoods be sustainable considering various insecurity and unforeseen outbreak, how can we increase consumption if nutritious foods to recommended levels given that our production level don’t add up? And how can food production in the north east be enhanced to guarantee sustainable access to adequate nutritious food? etc.
The Permanent Secretary, Budget and Planning, Jalo Ali intimated the attendants that they were gathered to fine tune ways to cushion the effect of food insecurity in the North East zone and the country, expressing belief that it is the world’s greatest threat to security.
He said, the participants are willing to collaborate and think out of the box to effectively address the problem, stressing the need to increase domestic financing of agriculture at state and regional levels.