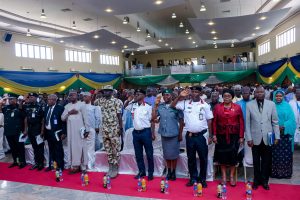 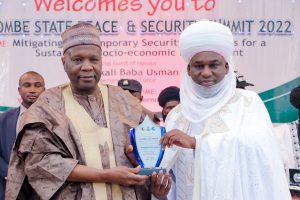 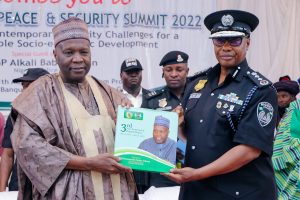 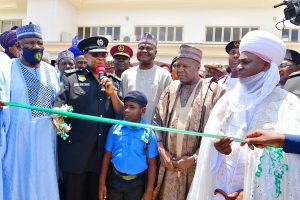 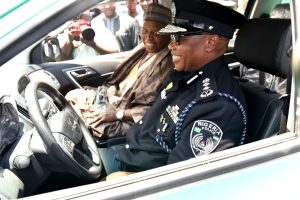 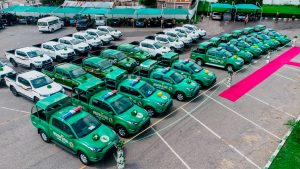 Gombe State Governor, Muhammadu Inuwa Yahaya says the peace and security summit convened by his administration will provide an opportunity for security personnel, government officials and other strategic stakeholders in the maintenance of law and order to aggregate and explore pressing internal issues with a view to identifying new security and community pathways of mitigating them for lasting peace and stability.

Governor Inuwa Yahaya observed that given the theme of the summit and the calibre of resource persons invited as well as its participants, the summit will chart a new direction for mitigating internal security matters not only here in Gombe State but in the country as a whole.

“We are all aware that our dear country is passing through a delicate period of immense security and economic challenges and risks. Criminal elements all over the country are united in their determination to threaten our common values, destroy our means of livelihood and make life brutish and miserable for our people. Since the year 2010, our gallant security forces have been battling to contain a brutal insurgency waged by the Boko Haram terrorists in Borno which rapidly spread to other states in the North-East, North-Central and North-West Subregions. Although the collective efforts of our men and women in uniform have succeeded in stopping the bombing campaigns of the Boko Haram insurgents, the colossal human and economic damage caused to our communities is still with us”.

He noted that while the country was struggling to arrest the menace of Boko Haram in the North-East, another security threat in the form of rural banditry, emerged in some parts of North-Central and North-Western Nigeria with significant impact on human and the economic well-being.

The Governor observed that the violent conflict which is majorly fuelled by climate change, population growth, proliferation of small arms and light weapons and ethnicity has equally pave the way for banditry and kidnapping which has since reached an alarming proportions in many states of the federation.

Governor Inuwa Yahaya said although the present security situation in the country is generally precarious, Gombe State is relatively secure and peaceful.

“For instance, if we take a look at the Nigeria Security Tracker published monthly by Eons Intelligence (A reputable Risk and Security Consulting Organisation), Gombe State recorded the least incidences of killings, kidnapping and other violent crimes during the first quarter of this year (2022) – thanks to the combined efforts of our security agencies and other relevant stakeholders. However, it is imperative to note that Gombe State is not immune and insulated from happenings in other parts of the country. We have our own share of local security threats fuelled by political thuggery, youth restlessness and unemployment which led to the emergence of the notorious Kalare group. The proliferation of local militia groups therefore calls for a proactive approach in dealing with these emerging threats and applying local strategies for tackling them”.

He said his administration was able to contain the menace of political thuggery and youth restiveness to the barest minimum through the combined efforts of the political class, security agencies, community, religious and traditional institutions thereby preventing rom metamorphosing into another criminal group.

“It is in this regard that we established the Gombe State Security, Traffic and Environmental Corps (GOSTEC) were we aim to employ not less than 2000 youths with the first batch of 500 corps already engaged to support the statutory agencies in the state in maintaining law and order. This home grown initiative is aimed at harnessing the energies of our youths in state building in line with our human capital development initiative”.

He said in order to consolidate on this gains, his administration is collaborating with the relevant security agencies to launch a special security task force to be named as Operation Hattara with the purpose of reinforcing security architecture in and around Gombe State.

“As you are all aware, soon after I was sworn-in as Governor, I established the first Ministry of Internal Security and Ethical Orientation in order to provide an institutional framework at the state level to support Federal Government Security Agencies, while also providing a framework for proactive resolution of conflict. I am delighted that our decision to establish the Ministry is yielding great results, as evidenced by the decreasing rates of violent crimes and conflicts in the state”

“To further strengthen our security and crime prevention system, we introduced new mechanisms for informal intelligence gathering and established the Citizenship and Leadership Training Centre at Boltongo for regular training of our youth on informal intelligence gathering and early warning indicators. Similarly, we increased the level of involvement of traditional authorities in dispute resolution and security management in their communities. We also established security committees with dedicated telephone lines for reporting security breaches and potential threats by members of the public. Furthermore, I appointed and empowered 3 Security Advisers, one each from the Military, Police and Intelligence Service backgrounds to achieve greater cooperation and collaboration between the government and federal security agencies”.

The Governor remarked that for these measures to lead to lasting peace and security, his administration established and sustained an effective partnership between the security agencies and the public.

“To develop this partnership, it is critical that we gain the support, understanding and cooperation of strategic stakeholders in the state. Also important is building a consensus between strategic security stakeholders and the security agencies on both preventive actions and how to respond to crime situations. It is my candid hope that this summit will recommend practical steps to be taken to achieve all these Thus, your inputs, experiences and suggestions are really important to both achieving the objectives of this Security and Peace Summit and to improving our internal security management system generally”.

Keynote speaker and Inspector General of Police IGP Usman Baba Alkali observed that the theme of the Security Summit “Mitigating Contemporary Security Challenges for Sustainable Socio-Economic Development” would not have come at a better time when the country is battling with security challenges in all fronts.

He said the Gombe State peace and security Summit is equally coming at a critical time when the Nigerian Police Force under his leadership is working towards deepening the engagement of the concept of community partnership in crime control.

He said the policy strategy seeks to address security challenges through active citizens engagement in the identification, analysis and mitigation of threats.

IGP Alkali said community engagement like the Gombe State peace and security summit by the state government falls perfectly within the framework of the vision of community policing.

“To this extent the Nigerian Police Force conveys its full and wholehearted support to the Government of Gombe State under the leadership of Governor Muhammadu Inuwa Yahaya for the vision in convening this strategic summit”.

Earlier in his address of welcome, the Secretary to the Gombe State Government, Professor Ibrahim Abubakar Njodi described the 1st Gombe State peace and security summit as historic where it underscores the untiring efforts of the present administration of Governor Inuwa Yahaya towards the protection of lives and property of the citizenry.

He expressed gratitude to security Agencies in the State for working assiduously to maintain the peace in Gombe which has so far placed the State as the most peaceful in the North East sub-region.

Shortly after formal declaration of the summit open, Governor Inuwa Yahaya in company of the Inspector General of Police Usman Baba Alkali and other top Government functionaries commissioned operational vehicles provided by Gombe state government to maintain law and order in the State in an initiative code named “Operation Hattara”.