Skip to content
January 24, 2022
Gombe State Government on says it has earmarked more than N8.499 billion for the construction of 10 modern markets, while 17 others have been set for upgrade across the state.
Alhaji Nasiru Mohammed Aliyu, the Commissioner for Commerce, Industry and Tourism, disclosed this shortly after the state’s Executive Council Meeting on Monday in Gombe.
Alhaji Aliyu stated that the move was necessitated by the need to alleviate the sufferings of farmers and market users in the state.
According to him, the state government will also leverage on the initiative to improve on its internally generated revenue.
He stated that N8,499,398,393 is for the projects, while N370 million had also been approved as consultancy fees for the designing, bill of quantities, supervision and monitoring of construction as well as upgrade of the markets across the State.
The Commissioner stated that the facilities which would include livestock and grains markets, would have all the necessary infrastructure such as boreholes, warehouses and conveniences, amongst others.
Alhaji Nasiru Aliyu said a consortium was awarded the consultancy services after a thorough bidding process.
The Commissioner disclosed that his ministry together with the consortium have since undertaken an assessment tour to identify where the markets would be constructed and those that needed to be upgraded to meet with present realities.
He added that with the construction and upgrading of these structures, traders who are mainly farmers would no longer experience the harsh market environment they had been exposed to for long.
On the timeline for the completion of the projects, the commissioner said: “I cannot tell you when until council decides whether to build all at a time or in phases.
“But we have the designs on ground and there is allocation for the projects in 2021 budget.”
He stressed that the projects when completed would improve the living standard of citizens, in line with the vision and priority of the administration of Gov. Inuwa Yahaya, to alleviate poverty by providing an environment that is conducive for development.
He said the idea to construct and upgrade the markets was consequent upon the determination of the present administration of Governor Muhammadu Inuwa Yahaya to give traders across the State a befitting market shelters while improving the revenue generating prowess of the State.
Also speaking the Commissioner of Youths and Sports Development, Hon. Julius Ishaya Lapes said the State Executive Council also approved the declaration of a State of Emergency on Water Supply Sanitation and Hygiene WASH sector in the State.
He said the programme is a National project which encourages States across the country to key into it with a view to addressing the challenges of open defecation.
( With additional info from NAN)
Ismaila Uba Misilli
Senior Special Assistant
( Media and Publicity)
14/12/2020 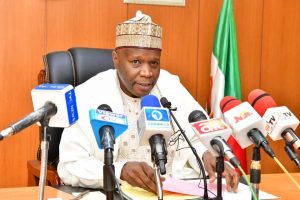