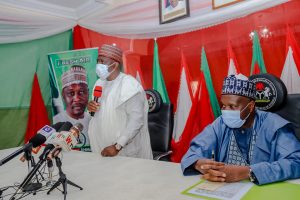 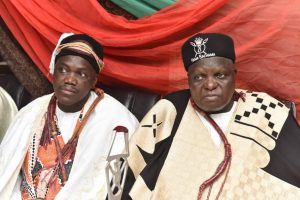 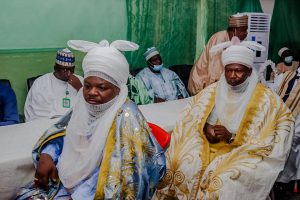 Following the perennial clashes between the Lunguda and Waja communities spread between Adamawa and Gombe states, the Governors of the two states Rt. Hon Ahmadu Umaru Finitiri and Muhammadu Inuwa Yahaya summoned a peace meeting in Numan, Adamawa state which brought prominent sons and leaders of both communities in their respective states to discuss on how lasting peace can be brought back to both communities who are brothers from time immemorial.

At the end of the peace meeting, otherwise known as the “Numan Peace Accord” the Governor State Governor Muhammadu Inuwa Yahaya read the following resolutions as signed by the two Governors and the paramount rulers of the two communities; HRH Kwandi Lunguraya Kuruhaye Dishon Dansanda and HRH Bala Waja Muhammad Danjuma Mohammed.
1. That the two communities cannot be separated having lived and inter- married for centuries.
2. That all Internally Displaced Persons camps should be closed within the next one week and people returned back to their homes.
3. That militia and hunter groups are hereby disbanded and their activities proscribed in both communities of the two states.
4. That leadership and elders in both communities of both states shall prevail on their youths and prevent them from causing any distraction and participating in violence.
5. That religious leaders should mount and sustain the campaign for peace. This shall also be taken up by youth groups from both communities in the two states.
6. That a committee for the rebirth of peace and sustaining it among Lunguda and Waja in both states be raised to comprise the following:
A. Deputy Governors of Adamawa and Gombe States as co-chairmen.
B. Attorneys-General and Commissioners of Justice from both states.
C. Commissioner for Local Government and Chieftaincy affairs, Gombe State
D. Permanent Secretary Ministry for Local Government and Chieftaincy Affairs, Adamawa state.
E. Commissioner Internal security Gombe State.
F. Permanent Secretary Special Duties.
G. Commissioners of Information from the two states.
H. HRH Kwandi Lunguraya Kuruhaye Dishon Dansanda
I. HRH Bala Waja Muhammad Danjuma Muhammad.
J. HRH Hamma Bachama Humon Ismaila Daniel Shaga.
K. H.E Dr. John Lazarus Yoriyo
L. Justice Hakila Y. Heman
M. Mr. Ibrahim Welye
N. Chairmen of Balanga and Guyuk LGAs.
O. Permanent Secretaries on security matters as co- secretaries.

The communique concluded by calling on the paramount rulers of Lunguda and Waja communities to ensure that the lingering land issues between the two communities are resolved so that people can go back their farms in safety.