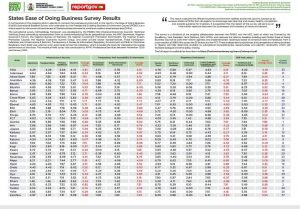 Gombe State has been ranked first among states that have provided attractive environments that promote business growth in Nigeria.

This was contained in a result of the State Ease of Doing Business Survey undertaken by the Presidential Enabling Business Environment Council (PEBEC) as a status report on the current attractiveness of states business climates for small and medium sized enterprises (SMEs).
Gombe is followed by Sokoto, Jigawa and Akwa Ibom States who ranked 2nd, 3rd and 4th respectively.
The subnational survey methodology framework was developed by the PEBEC-NEC Technical Working Group comprising representation from six states embodying the six geopolitical zones, the NEC (National Economic Council) Secretariat, Nigerian Governors Forum, the Nigerian Bureau of Statistics, the Nigerian Investment Promotion Commission, the Nigerian Export Promotion Council, the Nigerian Summit Group and other private sector representatives.
The PEBEC and NEC are chaired by Vice President Yemi Osinbajo.
The homegrown indicators used in the survey are infrastructure and security, transparency and access to information, regulatory environment and skills and workforce readiness.
Each state was rated on a ten-point scale across the indicators, which provided the basis for calculating the overall performance of the state.
The field survey was conducted by KPMG Professional Services between November 2020 and January, 2021.
The survey captured the reforms baseline enabling each state’s ease of doing business council to craft their own reform agenda and implementation roadmap based on empirical data and feedback from a cross section of 998 SMEs across the 36 states and the FCT.
A breakdown of the result showed that out of an average of in Infrastructure and Security, Gombe scored 5.86 in Electricity, 5.86 in Transportation, Primary Healthcare 7.50 and Security, 7.99, with an average score of 6.80.
In Transparency and Access to Information, the state scored 9.35 in Investment Promotion and 8.69 in State Information Structures, with an average score of 9.02.
In regulatory environment, it scored 5.75 in paying taxes, 8.21 in Starting a Business, 6.44 in Enforcing Contracts and 7.64 in Land, Property Acquisition and Development. Its average was 7.01.
Lastly, in Skill and Labour, Gombe scored 7.94 in Technical and Professional Skills.
The cumulative average of the state was 7.69, shooting it to the top of the list of states with the best enabling environment for doing business in the country.
Reacting to the development, Governor Muhammadu Inuwa Yahaya said the attainment of this feat is a clear demonstration of his administration’s commitment to Good Governance which has culminated in comprehensive reforms in land administration, financial management, revenue administration and the massive infrastructural development that are critical to doing business.
“Noteworthy is the drastic reduction in transaction time for processing land title and ease of payment of taxes as captured in the harmonised revenue law. In addition, the clear and purposeful drive in vocational and technical education, as well as support to SMEs, have ensured the upgrading of the skills of the youthful population of Gombe State”.

The Governor assured of his determination to sustain the tempo, while acknowledging the hard work by the public service in making this happen. He expressed belief that the success recorded is also part of the dividend of his administration’s comprehensive reforms in the civil service.