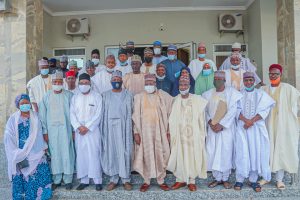 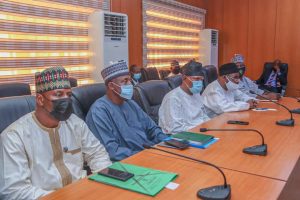 Gombe State Governor, Muhammadu Inuwa Yahaya has challenged the Governing Council of the College of Education Billiri to come up with realistic ideas that would assist the government in addressing the challenges confronting the institution for better service delivery.
The Governor made this known when he received members of the Governing Council of the College of Education, Billiri led by its Chairman, Dr. Usman Maijama’a Kallamu at the Government House.
Governor Yahaya commended the council and management of the college for their hard work, commitment and dedication to duty which led to the enlistment of the institution into the Tertiary Education Trust Fund (TETfund) intervention programme within the spade of 3 years.
Governor Inuwa Yahaya noted that the current economic challenges confronting the state places limitations to what government can do to meet the yearnings and aspirations of all and sundry, saying over 80 percent of the state allocation from the federation account goes to payment of salaries and allowances.
“The moment the N3.5 billion or little above comes in, we take off over N1.5 billion for salaries that is at the state level, it is even worst at the local government level. There are some local governments that cannot pay their pension allowances to their staff for the past 5-6 months”.
“So I want to urge you that from the gully erosion, to lack of facilities, to accommodation not only for the students but also for staff, the demands are too enormous that we need to look inward and devise some means by which we can meander through the turbulent waters”.
Governor Inuwa Yahaya who frowns at the menace of ghost workers in the civil service said with such development, government can hardly have surplus to address institutional challenges confronting the state such as the ones presented by the Governing Council. He however expressed determination to continue to manage prudently, the state resources and provide democracy dividends.
The Governor told the visiting Council members that as at the last count, the portal created by his administration for graduates of Gombe State origin to register has received over 4600 applicants with another 6000 in the HND, NCE, ND and Diploma categories.
He noted that the inverted pyramid formation in the civil service where many enjoy bigger emoluments at the detriment of those who drive the process is worrisome and drains government ability to employ young graduates and provide services to the people.
The Governor however said the current effort to digitize attendance of civil servants in the state will help to end the inherent anomaly in the system.
Earlier speaking, the Chairman Governing Council College of Education Billiri, Engr. Dr. Usman Maijama’a Kallamu said they were in the Government House to say thank you to Governor Muhammadu Inuwa Yahaya for finding them worthy to serve in the capacity as Council members.
He explained that under the period of 3 years, the college was able to gain entry into the TETFund intervention programme to which it has so far benefited a total sum of 1 billion naira in training, infrastructural development and research among others areas.
Dr. Kallamu informed the Governor that all the 19 academic programmes of the institution have been accredited by the National Board for Technical Education NBTE to further guarantee authenticity and the veracity of the College.
He intimated the Governor of the need to provide the College with access road as well as to address the monstrous gullies ravaging the institution premises among other challenges.