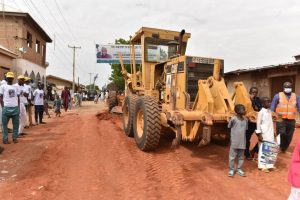 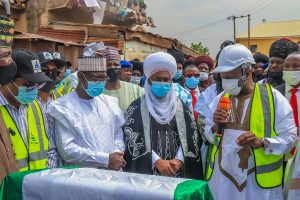 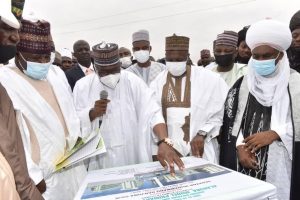 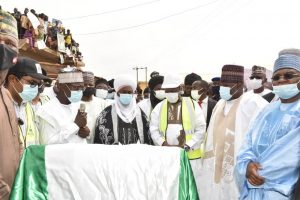 As part of activities to mark his 2nd anniversary in office, Gombe State Governor, Muhammadu Inuwa Yahaya yesterday flagged off the construction of a township road and a school in Kumbiya-Kumbiya ward of Gombe Local Government Area.

Speaking at the occasion, Governor Yahaya vowed to continue to justify the confidence reposed in him and his administration by the electorate. He said the road network project is part of the phase 6 of Gombe township road road project which is in line with his administration’s network Eleven-Hundred initiative, targeted at the construction of at least 100Km of roads in each of the 11 LGA’s.
The Governor also flagged off the construction of Alabura Model Primary/Junior Secondary School in Kumbiya Kumbiya ward named after a renowned educationist in the State, Alabura S Kudi, noting that the ward is the only one in the State that has no primary school as such, this is another election campaign promise fulfilled.
Former Governor of Gombe state, Sen. Muhammad Danjuma Goje, who performed the official ground breaking, commended Governor Yahaya’s outstanding performance and visionary leadership style, calling on the people of the state to continue to give him maximum support. He described education as the best legacy to bequeath, hailing the Governor for moving in that direction.
The people of the area, through Malam Kabir Usman Kukan Daka appreciated the Governor for bringing such gigantic projects to their area, assuring him of continued support.
Earlier, Commissioner of Education, Mr. Dauda Batari Zambuk urged the benefiting community to complement the efforts of the state Government by taking ownership and full advantage of the school to enrol their children.
The Chairman, Gombe State Universal Basic Education Board, SUBEB, Hon. Babaji Babadidi said when completed, the brand new school will serve as centre of academic excellence not only in Kumbiya- Kumbiya but Gombe state and the country at large.

” It is no longer news that the present administration of Governor Muhammadu Inuwa Yahaya is breaking new ground towards repositioning the education sector for better performance. This is evident in the establishment of new institutions, renovation, upgrading and remodeling of others in addition to equipping them with furniture and modern instructional materials”.