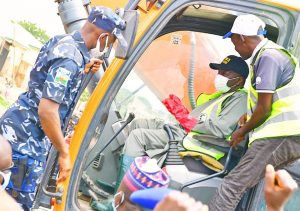 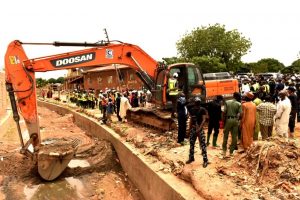 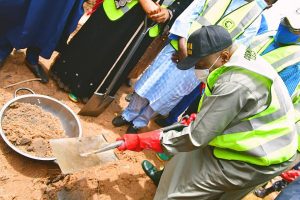 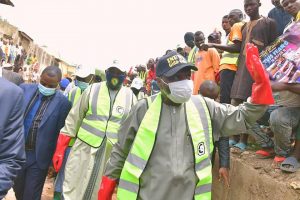 Governor Muhammadu Inuwa Yahaya of Gombe State has cautioned citizens against dumping of refuse in drainages, emphasising that the repercussion of such practice can be devastating to the health of humans and the physical well being of the environment.

Governor Inuwa Yahaya gave this indication while flagging off the desilting of storm drainages and major water channels in Gombe State at Dawaki quarters in the State capital.

The Governor said the exercise becomes necessary following the 2021 weather forecast report by the Nigerian Hydrological Agency which showed that Gombe is among the 27 states in the country with serious and concerning flood outlook.

He said to achieve a Gombe that is free from flood disaster, all men and women of good will must join hands with Government to not only clear water channels of dirt’s but to defend the environment from those wishing to destroy it.

“If we continue to toy with the environment particularly water channels, chances are that the rains can result into flood disaster, thereby destroying lives and property and equally polluting the water we drink leading to one disease or the other”.

Governor Yahaya said the desilting exercise will also be replicated across all the local Government areas to guard against flooding.

He stressed that his administration will not tolerate the indiscriminate dumping of refuse in water ways, disclosing that environmental protection corps will soon be commissioned with sweeping powers to monitor and enforce laws regarding sanitation and hygiene within the state.

Governor Inuwa Yahaya said his administration has equally approved over 361 million naira for the construction of 180 waste collection centres so as to discourage residents from dumping refuse in water channels.

Earlier in an address of welcome, the commissioner of environment and forest resources, Dr. Hussaina Goje said the desilting exercise is being carried out simultaneously across 13 sites with a total length of 23 kilometres.

She thanked the Governor for swiftly responding to the demand by her Ministry to save the people from imminent flood disaster, especially now that the precipitation is increasing by the day.

The Chairman of Gombe Local Government Council, Aliyu Usman Haruna and the Member representing Gombe North Constituency, Hon. Ali Baba Manu, who expressed appreciation to the Governor for his constant show of concern to the plight of the people said the leadership style of the state chief executive leaves no one in doubt of his love for the people at all times.